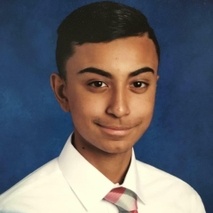 My passion is constitutional law and political science. In 8th grade, I was fortunate enough to take an enhanced honors Social Studies course called "We the People" that sparked my passion for constitutional law and political science. This class dealt with an intense study of the constitution as well as debating current events in order to justify and hone one's reasoning. Little did I know, this class would make me the person I am today. My teacher and I discussed topics such as economic inequality and tax reform, which pushed me to peruse through various media outlets and obtain factual content that would nurture my "arsenal of data" and my vocabulary. At times, I would be up until eleven just to watch the news and to be refined on my knowledge of current events. It led me to be an eloquent speaker and captain of "We the People" for debate.

Attending Yale Young Global Scholars would be a dream come true for me regarding my passion. Just the thought of being in the same room with students and professors from various parts of the world to engage in discussion over pressing law topics and current events would be astonishing to me. Even though I have taken advantage of the most rigorous courses at my school, such as AP and Early College Education English and History, Yale Young Global Scholars would provide me with the most sufficient and impactful content regarding the Law. In addition to this, public policy, human rights, market regulation, governance structures, and international law are all topics that are addressed within the program, and students have a final capstone project at the end that is designed to produce a solution to some of the problems that arise in the world.

Shahin is an intellectual who is passionate about law, government and politics. He has demonstrated a keen interest in those subjects, and he will be able to further those interests in the Yale Young Global Scholars program. He has extraordinary initiative, ranging from starting clubs on campus to developing his own nonprofits. The program itself will benefit from Shahin's participation.

Shahin has a passion for law, government and politics. He is currently taking advantage of the UCONN Early College Experience (ECE) English 1010 class that I teach called "Sustainable Democratic Societies." In this semester-long, writing-intensive and discussion-based class requiring thirty pages of revised writing, students are presented with equivocal prompts for which they must choose a topic and develop a claim. Shahin has written two papers tackling issues of government and economy. In the first paper, he argued persuasively that the founding principles of our country demand immediate campaign finance reform. in the second paper, he contemplated the demise of the American Dream in light of rising economic inequality. Both papers were well-composed and well-researched, clearly the best in the class. Furthermore, Shahin's drive for excellence is not limited to the classroom. Where there is not a program, he will create one. I am aware of Shahin's extracurricular activities because I moderate the Model UN club that he founded on campus. As president of this organization, he is responsible for recruiting members, presiding over weekly meetings, and shaping the overall direction of this fledgling club. In addition, Shahin is the founder and editor-in-chief of The Router, which is our campus?s first newspaper. After four years, we finally have one due to Shahin's persistence.

Shahin posted an update
July 2
One of the most amazing experiences that I've ever had! Thank you to everyone who donated to my campaign!

Before I begin, I would just like to say thank you.

Thanks to the generosity of not only the donors of my crowdfunding campaign but to Wishbone itself, I was able to have one of the most intense as well as exciting summers of my life so far. Meeting and interacting with people from all over the globe to discuss global affairs and international law with esteemed professors and lecturers was one of the most exciting experiences of my life. Wishbone gave me the opportunity to take full control over my extracurricular interests because they provided an avenue in which I could attend a program of my choosing, while not being too worried about how the financial side of things would impact me. Thanks to organizations such as the Dalio Foundation and Wishbone itself, I had an unforgettable experience.

Once again, thank you! This meant the world to me.

Shahin posted an update
May 21
Cannot wait for this summer! Thank you so much to everyone who donated!

Thanks to the generosity of all of you, I am able to attend this amazing program at Yale this upcoming summer. I absolutely cannot wait for the experiences and the amount of knowledge I am going to obtain as a result of the program! You do not know how much this means to me! I'll definitely keep everyone updated on all that I'll learn and experience.

Congratulations on reaching your goal! The Dalio Foundation is proud to provide support as you discover your passions and pursue your dreams.

You're an impressive young man. Best of luck to you!

Dalio Foundation matched this donation with $10

Dalio Foundation matched this donation with $5

Dalio Foundation matched this donation with $5

Your application essays were very thoughtful!

Great job, kiddo! I'm so proud of you, but not at all surprised. You will do great this summer.

Dalio Foundation matched this donation with $20

Shahin was accepted into Wishbone!
December 22
Successfully funded on April 19th, 2018!
Fully funded!
$6,000 raised
$0 to go
0 DAYS TO GO
Matched donation
Still want to help? Donate directly to Wishbone so we can help more students like Shahin.
Donate to Wishbone
Donors
Special Thanks
About the Program