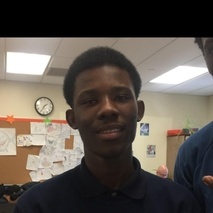 John
Successfully funded on May 16th, 2018!
Fully funded!
$1,085 raised
$0 to go
0 DAYS TO GO
Matched donation
Still want to help? Donate directly to Wishbone so we can help more students like John.
Donate to Wishbone

I discovered my passion for soccer, when I was 5 and my grandparents took me to our local field, to watch the youth academy of PSV Eindoven play. I was fascinated by them and how they were young but such great players. Growing up in the Netherlands and watching the greats such as Rudd van Nisterlppy, Arjen Robben, Wesley Sneijder, Dirk Kuyt, and of course my hero, Robin Van Persie, made me love the sport even more.

Attending US Sports Nike Soccer Camp, will be a big step in my career and the direction I want to go in the future. I hope this camp will not only let me become a better player, but also a better person. I know that at the end of the day soccer players are human, and many players have big egos so learning from the best, on how I can best deal with people from all different backgrounds, and how I can control myself and be professional will be very helpful. Also this camp will give me hope that my dream of playing alongside some of the best young talents around the country, possibly the world, may one day come true.

John loves to learn. He is motivated to be the best at anything that he does, as such, he is someone that will stay for office hours or stay a little after practice to talk to his coaches and teachers. He knows that to become a better student or soccer player he must soak up knowledge from the "experts" around him. US Sports Nike Soccer Camps will be a wonderful opportunity for a student like John because he will not take for granted having the opportunity to learn from coaches that are among the best in the region and country.

John's passion for, and his leadership role on, the soccer team began even before there was a soccer team. John and few of his students are credited with advocating for and convincing the school to offer soccer this year. He recruited his classmates, created a petition and met several times with our Athletic Director to get the team going. As a member of the founding team, John has been an integral part of building a team culture of professionalism and passion for the game. With the exception of John, the majority of the players in the team are new to soccer and are playing on a sports team for the first time. John models to his teammates what it looks like to come to practice and "work" hard at soccer, to be upset when losing a game, to celebrate a win and to be ecstatic for scoring a goal.

Soccer is more than a game to me, it is the love of my life, all I honestly know. Which is why I hold it so dear to my heart. As I am about 2 weeks away from the US Nike Camp, I can't wait for that amazing experience. The adrenaline that runs within me is like no other. I am looking forward to meeting new people, encountering great coaches, and of course playing soccer

Thank you all for your fundraising efforts this year! We are happy to fund the remainder of your campaign!

An Anonymous Donor matched this donation with $10

Great job so far! Keep up the fundraising!

The Pakter Family wishes you a great experience

I hope you have a great time at the camp! Can't wait to hear about it!

Make the most of it!

John was accepted into Wishbone!
February 2
Successfully funded on May 16th, 2018!
Fully funded!
$1,085 raised
$0 to go
0 DAYS TO GO
Matched donation
Still want to help? Donate directly to Wishbone so we can help more students like John.
Donate to Wishbone
Donors
Special Thanks
About the Program

Sending John to US Sports Nike Soccer Camps will cost $1,085.