Success! Aaron's scholarship was fully funded on May 8th, 2018. 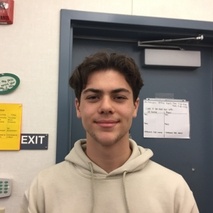 Aaron
Successfully funded on May 8th, 2018!
Fully funded!
$3,395 raised
$0 to go
0 DAYS TO GO
Matched donation
Still want to help? Donate directly to Wishbone so we can help more students like Aaron.
Donate to Wishbone

My passion is robotics.

While I was growing up, my oldest brother was always in his room on his computer. He was creating and making things out of a special language on the screen that made no sense to me at the time. This concept had intrigued me, and as soon as I had an opportunity to, I started learning how to code by myself. I learned through online programs as well as lectures and YouTube, having no specific goal in mind but to learn as much as possible about how to code. Through these methods, I have learned basic coding in HTML, Java, JavaScript, and Python. Learning code has helped me to develop a real-world skill that is very prominent in the Bay Area, which is the center of technology in the United States. A subject concerning coding that I want to learn more about is Artificial Intelligence in Robotics.

Envision NYLF Engineering & Technology will help me to pursue my passion for coding by allowing me to explore real-world applications of coding. The area of coding that I wish to explore most is robotics, and more specifically Artificial Intelligence in Robotics. I want to learn how to design a robot that learns by itself, and uses the information it learns to function more efficiently. Artificial Intelligence is going to be a prominent part of the technology industry, and I may want a career in creating it. The concept of Artificial Intelligence is interesting to me because it is the window into the future, in which more menial tasks will be automated and will not require human attention. Creating Artificial Intelligence is also a scary concept, as it can potentially lead to catastrophic consequences if not programmed correctly. This possibility makes me want to hopefully prevent these effects before they happen.

Aaron is a good candidate for Envision NYLF Engineering & Technology because of his intention to use his knowledge and skills toward an altruistic future. Aaron intends to work in the field to help ensure responsible robotic programming. Aaron understands that the ultimate responsibility for developing artificial intelligence falls upon the engineers. Aaron is skilled at synthesizing multiple sources of information and identifying larger trends and connections. As a student in AP US History, I've witnessed firsthand Aaron's ability to weave complex arguments using multiple sources. He has a keen ability to differentiate because causes of a phenomenon to the effects of that same phenomenon. This skill can be quite difficult for many students. Not so with Aaron. His ability to think critically will help Aaron when facing the rigor of learning engineering and ensure his success.

Thank you all for helping me to fund raise in order to attend my summer program. I cannot wait to attend NYLF Envision Engineering in order to get a head start on my chosen field of engineering and technology. I cannot stress how deeply grateful I am for you, as without all of the donations I received, I would not be able to attend this program. Thank you.

An Anonymous Donor matched this donation with $898

Aaron was accepted into Wishbone!
February 1
Successfully funded on May 8th, 2018!
Fully funded!
$3,395 raised
$0 to go
0 DAYS TO GO
Matched donation
Still want to help? Donate directly to Wishbone so we can help more students like Aaron.
Donate to Wishbone
Donors
Special Thanks
About the Program

Sending Aaron to Envision NYLF Engineering and Technology will cost $3,395.