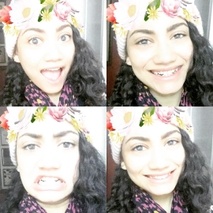 My passion is engineering.

It's an interesting story actually. I originally aspired to be a Clinical Psychologist until I realized it wasn't for me. I gravitated towards STEM fields, so I began my research with that information. Mechanical engineering stood out to me the most, but I needed a second opinion so I asked my dad. Completely ignoring my questions, he assumed I already made up mind. He explained he dreamed of being an engineer before he was unable to continue college. I had never seen him so proud; I didn't want to disappoint him. Soon after that day, I continued my research on the field and it is actually a perfect career for me. It combines my passion for humanitarian work and creativity with my analytical and mathematical interests. Engineering also lead to my involvement in coding and robotics, but that's another story

Melanie's long-term goal is to become a model for women in the field of engineering. She wants to negotiate the complexities of the subject while championing the path for more women in the future. Our school has a solid science department, but our electives are primarily humanities-based courses; we do not offer the lab hours or creative project development that Melanie is prepared to do, and our partnerships are primarily devoted to the social and emotional support of our students rather than the physical sciences. BlueStamp Engineering would not only broaden Melanie's experience; it would also serve as an important example to our small community of an important way to build a resume and to support professional aspirations while still in high school. Melanie could be a key model for her peers.

Melanie posted an update
September 7
A Recap of BlueStamp Engineering

At first it was a bit daunting being one of the few girls in the class, especially being a minority, but I got over it. No one treated me unfairly because of my race, gender, or anything else.

I'll admit it was intimidating being in a room of students who had more engineering knowledge and experience than I had. Nevertheless, the instructors at BlueStamp were patient, elaborate, and kind, so it didn't take long for me to catch up.

My first project, called the starter project, was the TV-B-Gone. In essence, it's a remote control that only functions as a power button. I spent the rest of the five weeks working on my intensive project. I decided to create a makeshift smartwatch. I ordered an OLED screen with a mini Arduino inside. I programmed a few features such as an animation, a clock, and a ping pong game. What's cool about the watch is that it's controlled by an accelerometer. An accelerometer is a device that measures acceleration, and acceleration is the rate of change of velocity in an object. I used it to control the watch through tilting motion. It is also how I'm able to move the paddles in the pong game.

My last step was designing and 3D printing the watch base. I designed the watch base using a CAD or Computer Aided Design software. I'm glad I was able to learn CAD because it is used a lot in Mechanical Engineering, the field of engineering I want to study.

Something I didn't have time to complete but will continue to work on at home is making my watch solar powered. I'm going to use this solar powered badge that I can walk around with and use to recharge the watch.

Overall, I would give my experience at BlueStamp Engineering an eleven out of ten. Not only did I get to build this cool project on my own, attend lectures on engineering concepts, and take advice form guest speakers, I made a few great friends I hope to stay in touch with throughout the school year.

Melanie posted an update
May 9
Thank you everyone!

Thanks to those who donated to and shared my campaign, I'm able to attend BlueStamp Engineering this summer. I will pay it forward by working hard throughout the duration of the program and helping others with their projects along the way. Please continue to donate through Wishbone so other students can receive the similar opportunities.

An Anonymous Donor matched this donation with $204

An Anonymous Donor matched this donation with $45

Me and your aunty Carmen are proud of what you have accomplished in your journey. Best of luck!

An Anonymous Donor matched this donation with $51

Melanie, yours is an inspiring story on a number of levels! I wish you the best as you pursue your dreams and passion.

Kudos to Melanie for helping to advance women's place in technology!

Melanie, you are a focused and determined young lady. I know you will succeed in your endeavors.

Melanie was accepted into Wishbone!
February 1
Successfully funded on April 23rd, 2017!
Fully funded!
$4,000 raised
$0 to go
0 DAYS TO GO
Matched donation
Still want to help? Donate directly to Wishbone so we can help more students like Melanie.
Donate to Wishbone
Donors
Special Thanks
About the Program