Success! Julian's scholarship was fully funded on May 26th, 2016. 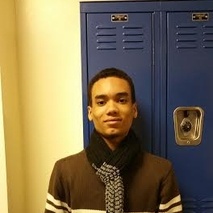 Julian
Successfully funded on May 26th, 2016!
Fully funded!
$1,129 raised
$0 to go
0 DAYS TO GO
Still want to help? Donate directly to Wishbone so we can help more students like Julian.
Donate to Wishbone

My passion is Computers.

When I was in 10th grade, I really didn't know what I wanted to do with my life, until my school adviser asked me what I did for fun. I told her that I played video games. She asked me if I was interested in computers. I said I knew some things about computer but not much. She showed me a programming language called basic through a tutorial made by a person she knew. I had fun doing the tutorial and decided to keep looking into coding. We started a coding club at our school that year. Now, I'm self teaching myself Ruby and building a web application for our school from scratch.

ID Tech Camps - New York will dive me deeper into the world that is programming and software engineering. Through it, I will meet people in the field that have already taking the steps that I will take in the future. Aside from this, I will learn more about computers and about the way computers work that without ID Tech Camps I probably might never obtain. Currently, I have't created a finished product. With ID Tech Camps I will have that chance to create something usable and concrete, something presentable.

I'll admit that in 9th I wasn't doing as great academically as I wanted to, in fact I'd say it was horrible. I almost failed some classes and did barely passed certain tests. I wasn't interested in anything which I mainly attribute to a death in my family. I know colleges will see this, especially my dream school, MIT, and wonder "Why was this student not doing so well academically as his other years in high school?" For this reason, I have committed myself to my studies and my school's motto, "Nothing less Than Excellence."

In almost every conversation with Julian, I learn something new. I knew that Julian wants to be a software engineer, and I knew that he likes to tinker with computers and machines, but he also told me that for those same reasons, Chemistry was his favorite class. I wondered what the connection between computer science and chemistry was, and he told me that by understanding elements and their properties, he came to better understand why certain elements are used in computer chips. It became apparent to me that Julian recognized and appreciated the real-world applications of chemistry, a subject I had always despised for being so abstract. "Balancing electrons, blah blah blah," I had once thought. But Julian's response is that silicon, much like carbon, can give and receive electrons readily, so can move between positive (1) and negative (0) charge easily. And 1's and 0's are the language of computers.

We don't have a computer science course, or even a club, here at school, but Julian is on codecademy.com and code.org and all over the internet to figure things out for himself. He attended our annual two-day trip to MIT Splash this past November and took as many computer science courses as he could. He came back to debrief with me over lunch after one of his classes, and he said he understood nothing and was never exposed to the language they were discussing in the course, but that he had spoken at length with one of the instructors afterwards who gave him some good starter websites.

Your ability and hard work should determine what you can accomplish, not how much money you have. Good luck!

Good luck, Julian! It sounds like you're really working hard!

Julian, best of luck with NYIT's iD Tech Camp! I hope it is an amazing and inspiring experience.

WE TRUST IN YOU. YOU CAN DO IT. PURSUE YOUR DREAMS, GOD BLESS YOU!!!

Julian was accepted into Wishbone!
January 29
Successfully funded on May 26th, 2016!
Fully funded!
$1,129 raised
$0 to go
0 DAYS TO GO
Still want to help? Donate directly to Wishbone so we can help more students like Julian.
Donate to Wishbone
Donors
Special Thanks
About the Program