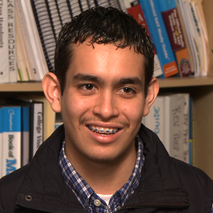 Luis
Successfully funded on December 21st, 2013!
Fully funded!
$1,524 raised
$0 to go
0 DAYS TO GO
Still want to help? Donate directly to Wishbone so we can help more students like Luis.
Donate to Wishbone

I come from a very close knit family that has high expectations for me. They push me to succeed in all that I do.

I want to attend UC Berkeley Academic Talent Development Program so I can study AP Biology. I am also excited about connecting to Berkeley and being able to experience taking a course on a college campus. I plan to challenge myself and participate actively in class so that I can be proud of my accomplishment.

My parents and my dream is to be a doctor, and this is what motivates me to succeed. I ultimately want to make the world a better place, and to help those less fortunate than me.

A Note from , Luis's Teacher

Luis is serious, ambitious, and hard-working. He is very pragmatic and focused. He sets high expectations for himself, and this goal-setting is always backed up with diligence, tenacity, and a lifetime of hard work.

Luis posted an update
July 7
Off to College!

I wanted to update you to let you know that I will be going to college next year! I will be attending Columbia University where I will study to be a doctor. I also received the Kluge Scholar Scholarship and the Menlo Park Rotary Award in Calculus BC to further my education. I want to thank you again for supporting me last summer in attending the Academic Talent Development Program.  I can't wait to continue working hard as a college student. Thank you again!

While at my program at UC Berkeley, I studied AP Biology. My favorite thing that I did while at the program was to dissect a fetal pig in order to gain a more comprehensive sense of the structure of the body. While I was initially terrified that I had to dissect the pig, I eventually overcame my fear and was able to gain a lot of useful information from the activity. I also had the opportunity to modify the genome of E. Coli bacteria in order to make it immune to an antibiotic and glow when exposed to ultraviolet light. This was really interesting because we were learning about biotechnology at the time and we were able to apply the knowledge that we had learned to modify the genome of the E. Coli bacteria without any instructions or guidance from the teachers. I enjoyed the freedom that was given to us when we were conducting labs, even though we had a set lab, we were able to design the procedure and overall experiment to tailor what we wanted to see as the outcome. Each lab that we did had a purpose behind it and we were able to use what we were learning in the classroom.

I thought that the class would not be too challenging for me because I did well in the biology class I took last year, but when I came to his program, I learned that in fact I did not know very much. We went into depth on a lot of concepts that my previous biology class glazed over, so having a solid foundation helped to take in a lot of material. I learned a vast amount of information in the six weeks that I was in the program, and I feel prepared to take the AP exam now.
As a result of taking this class, I plan to study biology in college because I find it fascinating, especially when it is challenging. Even though the classes were long, I was never bored because there was always something new and exciting to learn. I owe it all to the teacher that made even the most dense and dry topics fascinating.
I thoroughly enjoyed the class and it gave me an idea of what it would be like to take a science class in college, where everything is fast-paced and there are a lot of labs. I would definitely recommend ATDP to a friend because the classes are small so you get individualized attention from the teachers. The teachers are very supportive and willing to explain a concept as many times as it took in order for everyone to fully understand the concept. They were also very excited about biology and that simple fact made the class that much more interesting because the teachers were passionate about what they taught. The class was fast-paced and a lot was expected out of the students because we only had 18 days to learn a year’s worth of AP biology, but the experience was rewarding and one that I would not change.

Thank you so much for your donation. It allows me to have the opportunity to take AP Biology, a class that my school does not offer and that will open doors for me. I have always been fascinated with biology and having this opportunity means a lot to me. Once again, thank you for your generous donation.

University of California Berkeley donated $1,280
November 26
Successfully funded on December 21st, 2013!
Fully funded!
$1,524 raised
$0 to go
0 DAYS TO GO
Still want to help? Donate directly to Wishbone so we can help more students like Luis.
Donate to Wishbone
Donors
Special Thanks
About the Program