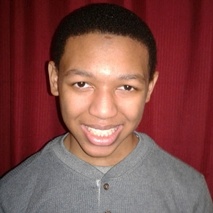 My passion is performing. I have always had a vivid imagination, which was especially fueled by my love for movies. It was nurtured by my grandmother, who was always watching something whether it was old-country westerns, Hollywood musicals, or exploitation flicks. Sometimes I would watch them with her, and every movie we would watch, I'd imagine myself being there, doing what the characters did. While taking theatre during my freshmen and sophomore year, I realized how much I love performing in general because it's the only time when I am truly happy.

Attending 92Y "Broadway, Here I Come!" Summer Vocal Institute will be very beneficial because I haven't, aside from theatre at school, had any professional training. To me, the greatest performers have multiple talents. I look up to Barbara Streisand, Neil Patrick Harris, and Queen Latifah, who have had success in more than one arena of entertainment. Having multiple skills is part of being versatile and being versatile is part of being a good actor, which I am going to be. When training to be an actor, there is no better place to learn than in the theatre, and I would be grateful for the experience overall.

From the day I met Elijah, it was clear that his passions all revolve around theatre and film. He lights up when he talks about his favorite films and how he sees himself pursuing acting as a career. He has taken theatre both years they were available to him in high school. He joined the Spoken Word club last year and performed an original piece at an all-school assembly.

Not only will the 92Y Summer Vocal Institute give Elijah the chance to learn and improve his singing, dancing and acting skills, but it will also help him develop self-confidence. Elijah is truly pushing himself to jump out of his comfort zone and into something that encompasses all his passions.

I first went into my summer program not being sure if I would like things. I have always had trouble relating to my peers, especially in social environments, and I was afraid of being misunderstood. But after the first day, everyone immediately got along great. It was a free and open environment for collaboration to cooperate in a creative space. Never did I feel insignificant or not paid attention to. The coordinators of the program were very understanding towards all of us and allowed freedom of expression. Overall, I had a great time and would be happy to apply next year.

For me, performing is my life. Ever since I was little, it has been my dream to entertain for a living. Whenever I was in a school play, I always took it the most seriously which resembled how I would be set apart from my peers based on the fact that the majority of them were interested in pranks and basketball. Part of my interest in signing up for a program was having the chance to be around others my age passionate about the same career as I am. Just the idea of the comfort of being understood for my ambition and how much entertaining means to me sounds refreshing. I'm so excited for the week to come and the opportunity to learn and build connections with people and I am so thankful and appreciative to be accepted.

I was lucky enough to receive a camp scholarship when I was you age and it was one of the wonderful experiences of my life. I hope you will also have an experience you will never forget.

I should add, I know you have a wonderful teacher because I got to work with her for several years when she live in VT. You have obviously made her smile on many occasions and that makes me smile.

An Anonymous Donor matched this donation with $55

I love Broadway and enjoy listening to young singers. Best of luck and God Bless!
Work hard and never give up.😊

An Anonymous Donor matched this donation with $20

Because i love him

Enjoy camp! I love Broadway too! I wish you the very best.

Can’t wait for you to have this experience!

Elijah was accepted into Wishbone!
February 1
Successfully funded on April 14th, 2018!
Fully funded!
$900 raised
$0 to go
0 DAYS TO GO
Matched donation
Still want to help? Donate directly to Wishbone so we can help more students like Elijah.
Donate to Wishbone
Donors
Special Thanks
About the Program