Mr. Balmert Wants To
Send Kayla to NSLC Theater
Kayla has applied to attend NSLC Theater this summer and is raising funds for her program fees. Can you help? 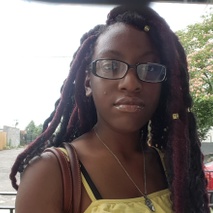 My passion is acting.
My passion for acting began through my first acting performance in eighth grade. During my eighth grade year, I was a part of a performance of Romeo and Juliet. In that performance, I was one of multiple actresses who played Juliet. This performance allowed me to understand the meaning of a true ensemble piece. I was able to have a connection with my entire cast and work together to create something beautiful for people to enjoy. While I was on the stage, I felt so comfortable and happy. Being on the stage gave a thrill that was addicting, which is why I audition for all my high school plays every year. The anxiety I face before an audition is so amazing because it excites me to do my best job. The thrill of being in the audition room and on stage excite me to continue in this adventure and in finding myself.

I believe that attending the NSLC Theater will assist me in pursuing my passion because it will help me in perfecting my skill of stage acting. Through attending this program I will be able to push myself and my knowledge of the stage.

Kayla has used her limited time and opportunities to pursue her passions for acting. In her sophomore year, despite taking a heavy course load, she used her free periods to pursue a project in acting and directing on a small scale. She led a group of students in a purely student written, acted and directed version of Saturday Night Live. She even helped to put on a full hour long live show for the student body.

Kayla's efforts with her student run comedy troupe as well as her teacher led theatrical performances in more traditional settings has given her the experience she needs in order to be successful and take her theatrical endeavors to the next level. Kayla will benefit hugely from having experienced performers and directors coaching her as she continues to advance from her novice, but driven, levels of understanding for the performing arts. She is a willing and avid learner who constantly seeks feedback and will willingly incorporate all feedback she receives into her craft.

Kayla I'm super proud of you and wish you continued success!

Kayla, you are a very bright young lady with a great future ahead of you. Anything you set your mind to, you can accomplish. I wish you nothing but success with this and don't forget the little people years from now when you win your first Tony Award!

Strive for what you believe in....set goals n you will achieve them. #StriveForGreatness

Continue to shine as bright as the star that you are Kayla.

Kayla was accepted into Wishbone!
February 2
Successfully funded on April 27th, 2018!
Fully funded!
$3,095 raised
$0 to go
0 DAYS TO GO
Matched donation
Still want to help? Donate directly to Wishbone so we can help more students like Kayla.
Donate to Wishbone
Donors
Special Thanks
About the Program