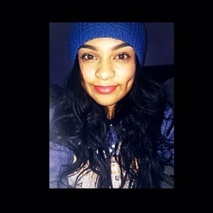 My passion is soccer.

Soccer has been my passion ever since I started kicking the ball at age seven. I stuck with the sport even when I was the only girl on the team. Soccer remains my passion because it cheers me up to the point where I forget any negativity occurring around me.

Cal Poly EPIC Engineering Camp will help me discover a passion other than soccer. It will help me determine what I want to major in the near future. This camp will also help me learn the real roots of engineering since there are many types. I know I feel passionate about women's rights, so if I explore engineering and like it, I can help prove that women can become engineers as well. I am eager to learn more about engineering and how it plays a big role to the world.

"Ashley brings great energy and a huge smile to anything that she participates in. She is a valuable asset to any team environment. She will bring not only great energy, but also an amazing desire to learn and grow.

The exposure that Ashley will receive at the Cal Poly Engineering Camp is key to young people with the potential that Ashley possesses. Success is a great possibly for Ashley, it is important for her to have exposure to the engineering field because in Oakland many of our youth does not; this will be a great opportunity to continue finding in what field she would like to make a career."

Before Cal Poly San Luis Obispo, I had no idea on what I wanted to major in. I just knew I loved soccer and helping out other people. Conversations about college with teachers who knew me well suggested that I wanted to become a doctor without borders since it engaged communities in third world countries. That idea of helping people fascinated me, but I wasn't as interested in the medical part. Based on many talks with doctors during consultations, I knew I didn't want to take 8 years to pursue a degree.

I eagerly waited for July 17, 2016. I was looking forward to making new friends and especially gaining new knowledge at my summer program. The first few moments at Cal Poly were already welcoming and warm. Immediately, I became friends with my roommates. After unpacking and getting settled, I said goodbye to my parents. I didn't want them to leave but I reassured myself that it was only a week and it would go by quickly.

At camp, I took many hands on engineering labs. They consisted of Biomedical, Architectural, Civil, and Materials Engineering. My favorite one was Architectural Engineering. I felt like I understood the topic really well and used a software online to create a bridge and plan out my ideas. Not only did I like that, but I also learned that there are engineers without borders that go to third world countries and help build homes for those who live in poverty.

EPIC, helped me explore a major that I plan on pursuing in the near future. In addition, I created memories with people from all over the world. For my parents college was an impossible dream, but I stand here today motivated to succeed in school and in life. Thank you for the endless support! I am forever grateful for people like you!
-Ashley Mendez, 16

We need more women engineers! Hope camp helps you decide if engineering is for you.

Go Ashley! So excited to watch you find and pursue and your passions!

Mr. Waller started this campaign
May 10

Ashley was accepted into Wishbone!
January 29
Successfully funded on June 8th, 2016!
Fully funded!
$1,475 raised
$0 to go
0 DAYS TO GO
Matched donation
Still want to help? Donate directly to Wishbone so we can help more students like Ashley.
Donate to Wishbone
Donors
Special Thanks
About the Program