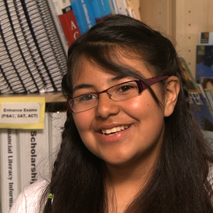 Rebekah
Successfully funded on March 28th, 2014!
Fully funded!
$1,375 raised
$0 to go
0 DAYS TO GO
Still want to help? Donate directly to Wishbone so we can help more students like Rebekah.
Donate to Wishbone

Growing up, I was very sheltered. I never really got to know about my own community. Then, I read about the ocean and all of the mystery it holds. I read about dolphins speaking to each other through echolocation and sharks with rows and rows of sharp teeth. I realized that, living in the Bay Area, the ocean was not so far away. But then, I read about how the ocean is polluted and species were really disappearing. I could not let that happen so I devoted my time to do what I could to save the living organisms in the ocean from disappearing.

I am excited about conserving marine life because the ocean takes up 75% of the world and we have not even come close to discovering all of the organisms that live under the sea. If we as humans do not stop polluting the ocean, we may wipe out some species before they are even discovered. When I am studying marine life, I feel as if I am doing something good for humanity by increasing our knowledge of the world that we live in and fueling our curiosity to learn more.

The Marine Science Institute Project Discovery is the best program for me because I will be living on a boat studying marine life, just like a marine biologist. I want to be a marine biologist so that I can study specifically what species are affected by human activity and how we can save them from going extinct. This program will give me experience in the work environment of a marine biologist, which will make me competitive when applying for college and for a job as a marine biologist.

A Note from , Rebekah's Teacher

Rebekah is a highly motivated student who holds herself to exceptional expectations. She sets high goals for herself and works her hardest to achieve them. In class, when she finishes her classwork, she always uses the extra time to help out her peers by either explaining her ideas and thinking, or by asking them questions to help guide them towards the correct answers. When learning about science, she is never satisfied with simply getting correct answers. She always pushes herself to deeply understand the concepts.

I wanted to thank you for sponsoring me! As you may know, I have applied to go to a marine biology camp this summer and I’m really excited. My biggest dream is to be a marine biologist and study coral reefs in Australia. I am so happy to do something with my summer that will help me get to college and I am so grateful to you and Wishbone. Thank you a million times!

I was inspired by your story, and hope that the Marine Science Institute Project Discovery is a wonderful experience! Enjoy every moment of it, and let it inspire you in tough times!

Rebekah
We are 2 sisters (we are 7 and 11) and we are really excited about your interest in marine biology. We hope you reach your dreams!
Sydney and Harper

Successfully funded on March 28th, 2014!
Fully funded!
$1,375 raised
$0 to go
0 DAYS TO GO
Still want to help? Donate directly to Wishbone so we can help more students like Rebekah.
Donate to Wishbone
Donors
About the Program