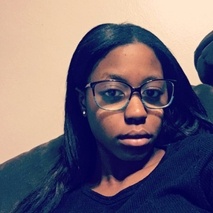 My passion is running.

Running has always been my escape from reality. Growing up, I have always been the fastest runner compared to all my friends. As a little girl, I often outran all of the girls and some of the boys. That I could beat many boys was amusing to many. Although I considered running my love, it was competitive racing that would emerge as my passion. The first time that I competed against other girls my age was four years ago. During that race, I placed fifth in the City against six graders. Ever since that day, I’ve taken running to another level. Currently as a high school sophomore, I know that running will be key to receiving a college scholarship. I feel fortunate that something I love so much will prove to be a key that opens the door to my future success.

Standing barely five feet tall, Tyla entered ninth grade at a school that is defined by a student population that's roughly 95 percent boys and five percent girls. While Tyla's small frame could have easily resulted in her having been overlooked, Tyla proved to be a force with which to be reckoned. She outpaced her male counterparts both academically and athletically. Her commitment to being excellent, served as her motivation to remain on top. In the process of outdoing herself, she focused on continuing to rise. Tyla consistently put in hard work on both fronts. Tyla's focus on her passion for both learning and running, has allowed her to continue to grow and evolve as both a student and an athlete.

Keep running until you reach your full potential!! I am rooting for you!

Your dad is a great guy and I know your a reflection of him. Good luck in all that you do!

Tyla, continue to make us proud... love ya!

I learned about your goal thru Ms. Lonice Eversley. I wish the greatest success and deepest fufillment in reaching it.

Hey Tyla, I'm an alum at UASCS and was also on the track and cross country team. You're in great hands under coach Flu and Lonice. Keep up the grades and keep the times fast. Chase that bag.

I'm cheering for you, Tyla! Wishing you an amazing summer! You're a ROCKSTAR!

tyla was accepted into Wishbone!
February 1
Successfully funded on April 19th, 2017!
Fully funded!
$605 raised
$0 to go
0 DAYS TO GO
Matched donation
Still want to help? Donate directly to Wishbone so we can help more students like tyla.
Donate to Wishbone
Donors
Special Thanks
About the Program