Success! Elizabeth's scholarship was fully funded on May 10th, 2016. 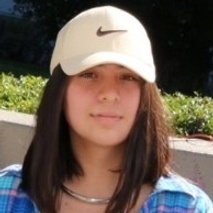 Elizabeth
Successfully funded on May 10th, 2016!
Fully funded!
$450 raised
$0 to go
0 DAYS TO GO
Still want to help? Donate directly to Wishbone so we can help more students like Elizabeth.
Donate to Wishbone

My passion is Film.

I discovered my passion for film when I was about 9 years old. It all began when I was at Walmart with my parents and a lady came up to my mom and I and told us that I looked like a new possible star in a Disney Channel or Nickelodeon show. She talked about a casting that was going to be in San Francisco for the next following week. This lady had just told me I looked like a new possible TV star, as a kid those were the words any kids wants to hear so I begged my mom to take me to the casting. My mom told me she wasn’t going to take me to any casting until I had my degree from High School & College. At that moment I didn’t understand why she was being so strict about it but I grew up to realize that she was right. As time passed I began to realize that I did want to be part of a show, but not as an actress. This was really confusing to me especially as a little kid I didn’t know what other jobs/careers were out for me besides being an actress to be part of a show. Years later I began to search through the internet how a show is created. I seen many options like camera operator, screenwriter, director, producer etc. At that moment I remember I just looked at my computer screen saying, “Yes this is it!”

Attending Film Acting Bay Area will help me explore my passion by actually giving me the feel of the filming career. It will be a new experience where I can actually learn how a camera is operated because I was never taught anything about filming. This program will definitely leave an impact on my life to assure if I want to 100% pursue this career once graduated from High School. This program will also be very important for me to gain many skills on what it's like to create a film by going into depth with the steps that one has to go through to accomplish a film.

As a hard working high school student who is passionate about filmmaking and as taken the initiative to understand as much as she possibly can about the film world on her own, Elizabeth would greatly benefit from two weeks of guided instruction and hands-on learning. This camp, which takes the students through the entire process of creating a short film all the way from developing the initial concept to editing film footage, will give Elizabeth a solid understand of what it takes to create a film--and will give her the opportunity to see if this is something she wants to pursue in college. As she is at the beginning of her college application process, the self-knowledge she'll gain from this experience will be invaluable and allow her to tailor her college search. It will also give her a meaningful summer experience, which is a topic she must write about on her University of California college applications.

This summer was one of the best unexpected experiences of my life because of your support. Each consecutive week I was attending an acting class. Each class session I was assigned a script of a variety of genres from comedy to drama. In each class I was given an hour to rehearse with my scenes partners to then film and perform the scene. Being able to be part of this summer program has taught me the importance of acting for film. The importance of being a character by not only saying the lines but by transmitting it with the actions. There is so many things that I have discovered that acting is not just acting its more of taking the audience to the moment. I met a lot of talented people that you wouldn't expect to be in an acting class like a lawyer, a marine, college students and many more. Each person that I met in this class has given me a positive impact in my life because of the constructional critique allowing me to grow in this industry and as a person. A special thank you to you once again for allowing me to take on this memorable chapter of my life. Without your support I wouldn't be the person I am now.

Hey, like I told you before, I want you to see reaching and achieving your dreams, you have many possibilities, more than me, I want to see you happy doing what you love. ❤

My niece says you're amazing and could use some help, so I'm in.

If our daughter Laura supports this....so do we!

This is a great opportunity for you Elizabeth!

I believe in you. Best of luck!

Excited for you to explore your passion Liz!

Elizabeth was accepted into Wishbone!
January 29
Successfully funded on May 10th, 2016!
Fully funded!
$450 raised
$0 to go
0 DAYS TO GO
Still want to help? Donate directly to Wishbone so we can help more students like Elizabeth.
Donate to Wishbone
Donors
About the Program