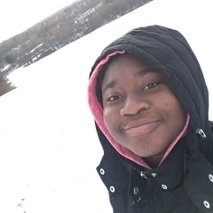 Stephanie
Successfully funded on March 19th, 2018!
Fully funded!
$3,295 raised
$0 to go
0 DAYS TO GO
Still want to help? Donate directly to Wishbone so we can help more students like Stephanie.
Donate to Wishbone

My passion is studying cultures. When I first came America, I was one of not too many Ghanaians in a pre-dominantly Hispanic community. My first best friend was a Muslim girl from Bosnia. It was intriguing to learn about her culture and struggles as a Caucasian Muslim. I moved to Connecticut in 6th grade. To my surprise, there was more diversity in the town of East Hartford than I expected! I became friends with multiple people of different ethnic backgrounds. All of this has sparked my interest with studying different cultures.

The thought of attending NSLC International Diplomacy will make my heart beat with even more excitement. I see this program as an opportunity for me to achieve my dreams of studying cultures, and possibly even becoming a cultural anthropologist. I understand this career field is very rigorous, but I'm always willing to put in the hard work. NSLC International Diplomacy will definitely benefit individuals with the same background as myself by allowing them to be involved with something they're really passionate about. I'm grateful for this opportunity.

Stephanie has a personality where she is very inviting and engaging--this allows her to support others while capturing their attention and interest; she is able to bring her peers to another level. I have seen this happen in the Science Café Club that she has been involved in. She makes others around her better.

Stephanie is an exceptional candidate for NSLC International Diplomacy program because not only does she possess the passion for the topic, she has had many great experiences that she can bring to the table which will enrich the experience of other student participants. Stephanie will benefit from attending their program because it will provide her with an in-depth opportunity to live the life of a diplomat where she can be immersed in the experience by investigating, debating and seeking solutions to real life challenges that are facing our world. I am positive that Stephanie will gain and strengthen skills that will make her a stronger student and better prepare her for college work and the demands of college classes in this area. In addition, seeing her student leadership, I would love for her to be come back and start an after school club on a topic concerning cultures, global diplomacy, etc. because these are topics that her peers should be aware of (and already may have an interest in) and be able to further investigate if they wish since a forum does not exist at this time.

Stephanie posted an update
July 24
A Moment to Remember

Unlike most of my peers at East Hartford High School who were involved in Wishbone, my program was In Washington D.C., not Connecticut. The idea of traveling by myself was scary, but it shows how one can achieve greatness once they step out of their comfort zone. As soon as I stepped on the main campus of Georgetown University, I felt this exhilarating rush of adventure spread through my body. I was able to interact with kids from different countries such as China, Brazil and even Australia to name a few. I even learned the significance of domestic diversity as I witnessed so many kids from different states represent their home state so proudly. As a result, this allowed me to have as much pride for Connecticut than anything else in this world. I met my birthday twin-hence fulfilling the birthday paradox. As a program filled with aspiring diplomats, we ran through the streets of Times Square, strutted through the walkways of D.C. in our fancy suits and dresses, we explored every single inch of the monuments we visited(even at midnight), we stepped on Finnish soil for one day, we were drenched in sweat while waiting outside the State Department building, we speed walked through campus in order to be 15 minutes early to our next meeting, we met influential ambassadors/professors along the way and we partied like no tomorrow on the last night together. Part of being in the program was wearing this lanyard indicating our hometown and our name. The program has had such a huge impact on me that I feel incomplete without wearing my lanyard or even carrying my NSLC binder around. One night, we were paired up with other kids. That night will be one of the nights that I WILL NOT forget. I was paired up with one girl from California and another girl from Virginia. We talked about our lives and it got extremely personal and emotional. Another time we did a rope course at the University of Maryland and I was partners with a girl from Australia. We were both able to bond over us reminiscing about swinging when we were little. Swinging for me was like flying into this new reality; I was able to picture myself living this life where I'll be free because I'll be flying all over the world. I'm happy to say that International Diplomacy with NSLC has given me a start to my sincerest desire. I have strong faith that the relationships I have created with the people who attended this program will be long lasting relationships, no matter which corner of the world that we're currently on.

Stephanie posted an update
May 8
D.C, Here I come!!!

So much good news has happened within these few months. I sincerely would like to thank the Dalio Foundation and the Wishbone Organization for providing the funds and the platform to raise money for my passion. I also want to give a huge shoutout to the individuals who were involved in this process. Without your support and consideration, I don't think I would've found another alternative to achieve this goal. As of now, my advocate and I are extremely excited for the trip in July. I have started to pack some things in my suitcase.

Stephanie was accepted into Wishbone!
February 2
Successfully funded on March 19th, 2018!
Fully funded!
$3,295 raised
$0 to go
0 DAYS TO GO
Still want to help? Donate directly to Wishbone so we can help more students like Stephanie.
Donate to Wishbone
Donors
Special Thanks
About the Program