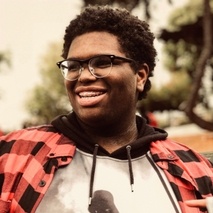 Calvin
Successfully funded on April 19th, 2018!
Fully funded!
$1,750 raised
$0 to go
0 DAYS TO GO
Still want to help? Donate directly to Wishbone so we can help more students like Calvin.
Donate to Wishbone

My passion is acting.

I discovered my passion for acting last year in drama class, when our class made a movie called Dysfunctional High. I played one of the main characters and I loved it. It was one of the best things I've ever done, being someone who wasn't me and it made me so happy. Being able to create a character and their backstory just made it so fun and made me realize that it was something I would like to do for the rest of my life.

Working with a team on something creative will grow my knowledge of camera acting. It will also help me in another one of my other passions, directing/film making. Attending the US Performing Arts Acting for Camera will help me pursue my passion for acting, because it will help me see what things are really like working in front and or behind the camera.

Calvin is a superb candidate for US Performing Arts Acting for Camera because he has honed his performing arts skills by choreographing and performing in every school assembly, coming up with our mentor group cheer, writing, directing, and performing in two movies, and launching our first ever drama club into phenomenal success. This is besides the fact that he is a resilient and creative student government president who is able to work with school administration to firmly and warmly communicating student body priorities and creatively working within existing limitations set forth by the principal and vice principal. Additionally, Calvin has written several books to hone his love for storytelling, which he seeks to ultimately channel into what will be a smashingly successful career in performing arts.

Calvin posted an update
August 30
One of the best experiences of my life!

This summer I attended the US Center For Performing Arts: Acting For The Camera workshop. It was an amazing learning experience and I met a lot of amazing people and teachers. It was great to be on a college campus and sleep in a dorm with people. I can also take the knowledge from the workshop and apply it to any more projects I do in the future.

I've known of you and have known your grandmother for years and wanting the best for you.

Dearest Grandson, , You are more Wonderful than Nene and I could have ever imagined you would be. So proud of you,. Blessings, Nene & Nana

From Lamont and I. We love you!

He has a bright future and has the artistic gifting.

Calvin was accepted into Wishbone!
February 2
Successfully funded on April 19th, 2018!
Fully funded!
$1,750 raised
$0 to go
0 DAYS TO GO
Still want to help? Donate directly to Wishbone so we can help more students like Calvin.
Donate to Wishbone
Donors
Special Thanks
About the Program

Sending Calvin to US Performing Arts Acting for the Camera will cost $1,750.