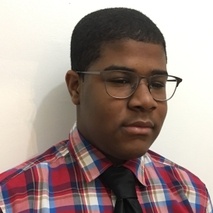 Trevlon
Successfully funded on March 30th, 2018!
Fully funded!
$1,600 raised
$0 to go
0 DAYS TO GO
Still want to help? Donate directly to Wishbone so we can help more students like Trevlon.
Donate to Wishbone

My passion is culinary arts. I first tried cooking when I was five, attempting to make pancakes. It took me several attempts but I finally made a pancake that was edible. Soon after, I realized that one major requirement of cooking is improvisation and trying different methods. This is extremely imperative and something I have been consistently working on since that first attempt at a pancake.

I progressed and when I was in the 6th grade, I assisted the culinary arts educator and team as they prepared a Thanksgiving dinner for over 500 students and teachers. Taking the initiative to help out during this major event confirmed that I had an undiscovered passion for culinary arts. The experience of that day has stayed with and I have been cooking ever since. Now, at home, I help cook for special events such as Thanksgiving and New Years Eve. My desire to cook has rapidly grown over the years and I am currently still learning new things in this field and coming up with new ideas to try, which is why a summer at ICC Cooking Camp is such an exciting opportunity!

Trevlon is a natural chef. He comes from a long line of family members who were/are professionally trained cooks. In addition, Trevlon is an active participant in our school's culinary arts department, where he has helped prepare a meal for our student body, friends and family of the school. ICC Cooking Camp will give him the opportunity to enhance his cooking skills and, hopefully, take them to an even more refined level.

Trevlon has consistently shown me that he is able to go out of his comfort zone to be a leader and, when given minimal prompts, communicate effectively. Trevlon has improved his ability to ask for help when in a situation of uncertainty. This is a testament to his maturity which is seen in the classroom and in life.

Trevlon was accepted into Wishbone!
February 1
Successfully funded on March 30th, 2018!
Fully funded!
$1,600 raised
$0 to go
0 DAYS TO GO
Still want to help? Donate directly to Wishbone so we can help more students like Trevlon.
Donate to Wishbone
Donors
About the Program

Sending Trevlon to ICC Cooking Camp for Teens will cost $1,600.