Success! Linda's scholarship was fully funded on May 26th, 2015. 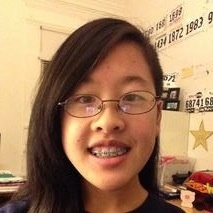 Linda
Successfully funded on May 26th, 2015!
Fully funded!
$4,500 raised
$0 to go
0 DAYS TO GO
Still want to help? Donate directly to Wishbone so we can help more students like Linda.
Donate to Wishbone

My passion is seeing the impact of human interaction.

Over the summer, I volunteered at a non profit program called SF Breakthrough. From the years 2008- 2010, I attended this program as a student, and as a graduate I wanted to help the community that had helped me.

As a volunteer, I grew the most from the interactions that I had with other students and teachers. There was one student in particular who I always watched out for. I saw the drive and determination that he had to improve. I felt the peer pressure that was around him, but I could also feel his stronger sense of identity. This student helped me see a more mature part of myself.

The program I am interested in studying at [email protected] is a philosophy class about happiness. I've always had a love for learning, talking, and even arguing about philosophical topics. My school, unfortunately, does not offer any courses on philosophy. Furthermore, this summer program will help me hear stories and experiences that are different than the ones I am currently exposed to in my small community.

"I am in awe of Linda's ability to keep challenging herself to learn more—about herself, about social justice, mindfulness, world events...you name it. Linda is a terrific candidate for the [email protected]: Pre-College Program because she embodies an awe-inspiring connection between her commitment to her academic and personal education. She knows that school and schooling are more than learning about science, math, English, arts, etc. She pursues opportunities that allow her to learn for the sake of learning.

Brown's "Happiness: Philosophy and Psychology" course is a perfect match for Linda, who puts genuine effort into extending her learning in intentional and mindful ways, both aware of her own needs, and of what the world/the environment/the society in which she lives needs from her. Moreover, she certainly has the maturity, independence, creativity, gumption, and the proactive learning skills necessary to follow through with her commitments to both programs."

These past two weeks have been one of the most productive weeks in terms of self-reflection and growth. The independence and responsibilities given to me at the program showed me how I react and learn in certain situations. I learned to meet and talk with the professors and really advocate for myself. Not only did I need to step up in order for adults to recognize me, but I needed to reach out to students and put myself out there.

In my class, Evil: the History of an Idea, I learned several theories on how people explain the evil behaviors and events around them. I learned how in the western world the majority of people used to believe that people were possessed by the devil or that God wanted to punish those who weren't faithful to him with storms and hurricanes, but now that idea has sifted into people believing in "Situational Forces." After "the Stanford Prison Experiment," people began to question "bad and evil people." People saw good students, healthy students, turn into power hungry "guards" and submissive "prisoners." I also learned about psychopaths, and we questioned their control over their mental illness. For if they are born with this illness then they cannot control their actions, so are psychopaths justified for their crimes?

During the school year I read a play by William Shakespeare called "Othello." In this class we talked about the character, Iago, and how he is arguably on of the most evil characters in literature. People, in general, are satisfied when we hear criminals confessing their crimes and being locked up. However, Iago's last word to Othello were "what you know, you know." He does not give Othello or the reader a sense of resolution. Being able to connect what I learned in school to a topic I am passionate about makes school even more worth while.

This experience has taught me so much about who I am and who I want to be around. It has taught me about the communities I value and the characteristics I want to keep and those I want to let go of. I gained a lot of language that will help me communicate what I see and how to express my ideas clearly. Thank you for giving me this opportunity to learn more about the environment I want to thrive in. I am truly changed by this experience! Thank you.

Thank you for everyone who donated to my campaign. I look forward to this experience that you all made possible. I can't wait for these two weeks and hope that the experience changes and shapes me to be more impactful and beneficial to my growing communities. Thank you again for you generosity. ~Linda

An Anonymous Donor matched this donation with

Linda was accepted into Wishbone!
February 3
Successfully funded on May 26th, 2015!
Fully funded!
$4,500 raised
$0 to go
0 DAYS TO GO
Still want to help? Donate directly to Wishbone so we can help more students like Linda.
Donate to Wishbone
Donors
Special Thanks
About the Program