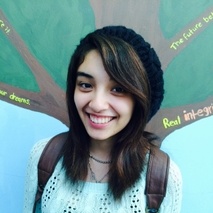 Jasmine
Successfully funded on June 10th, 2015!
Fully funded!
$435 raised
$0 to go
0 DAYS TO GO
Still want to help? Donate directly to Wishbone so we can help more students like Jasmine.
Donate to Wishbone

My passion is acting.

One day, I figured I should participate in my school play. I really enjoyed participating because I liked becoming different kinds of characters from different genres. Performing was my safe place.

Even though acting is my passion, I still have room for improvement. Film Acting Bay Area is a great opportunity because it develops and challenges the participants' abilities. I have never really been challenged to do things like this. The school that I'm attending does not have a performing arts program, so I hope to start one of my very own.

"I have the great opportunity to see how Jasmine thinks about big questions, interact with her peers, and develop as an individual everyday. Jasmine is a great candidate for Wishbone and Film Acting Bay Area because she has a great attitude and willingness to learn new things.

Jasmine would benefit greatly from participating in this program. She would be able to develop her existing skills and learn new ones to bring her closer to reaching her goal of starting a performance arts program at our school. In addition to this, this program would give her the confidence in her self and her abilities and the space to demonstrate her abilities in each aspect of performance so far."

The program I attended was the greatest experience I've ever had. First of all, I want to thank you all for giving me this opportunity, I appreciate it. I learned so much about myself also. I also learned new acting skills. For example, when acting, I learned you have to react and not just act. It makes it more believable and will make the audience feel like they are part of it. My teacher, Brian, was the greatest teacher I had. He taught me many skills and I will take them with me and share them with people who want to learn acting. On the first day, I was greeted and welcomed kindly and immediately connected with my teachers. I made a couple of friends, and we were a little family because we all got close to each other. I also learned how to be more open with people and not feel shy talking to them.

The first week we learned how to become the character. When we act, we don't say he/she, we say "I" like if you are the character. The second week we talked how to react towards the scene how to make the audience believe that it is real and not all just an act. This was continued in the third week. The fourth week we talked about how our traumatic experiences actually help us act better because you can relate to the scene and make it look real. The fifth week we didn't learn anything new; we did our scenes. On my last week, we started to do a film for a festival and it was a fun experience to do with my classmates and a great way to end my summer.

Nearly three years ago, I didn't pass the 9th grade due to family problems, emotional problems, and lack of confidence. I wouldn't speak to my peers because I deemed myself inferior to my classmates. When I walked into the school doors at the beginning of this year, afraid of what was to come, I was greeted by kind, familiar faces telling me how excited they were to see me thrive. Looking back, I could not be any prouder of myself this year because I made connections with peers at my school, advocated myself in terms of academics, and felt confident in myself so that I can pursue my dreams. Film Acting starts next Saturday, and I am thrilled because it marks the stepping stones of my development and the beginning of my transition into a mature young adult. I want to thank everyone who donated and helped support my campaign because you have all given me an opportunity and a second chance to thrive.

Jasmine, it has been such a pleasure to be your English teacher - twice! I can't wait to hear about this experience and I am sure that you will grow and learn so much from it. Love, Ms. Rice

I think it's awesome that you want to bring back skills from your summer experience to build a new program for your school. Best of luck!

Mr. Edwards started this campaign
May 20

Jasmine was accepted into Wishbone!
December 8
Successfully funded on June 10th, 2015!
Fully funded!
$435 raised
$0 to go
0 DAYS TO GO
Still want to help? Donate directly to Wishbone so we can help more students like Jasmine.
Donate to Wishbone
Donors
About the Program